Why is Chester Hanks, AKA Tom Hanks and Rita Wilson’s Son, Like This? 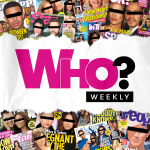