42. Blackface, Spanking & The Eggplant Capital of the World (with Kevin Ryder) 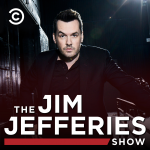