GSMC Movie Podcast Episode 113: RBG and On the Basis of Sex 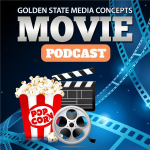