Hozier 'Thrilled' With First No. 1 Album: 'I Genuinely Didn't Think That This Was Going to Happen' 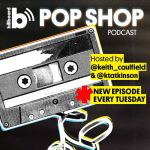