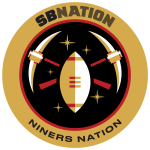 Good Morning I'm Rob Stats Guerrero today's Monday October Fifth Twenty twenty here's what's happening with your San Francisco Forty niners. The niners dropped at to into after a twenty five, twenty loss to the Eagles on Sunday football in the worst start of his career nick mullins turn the ball over three times but he made up for it by overthrowing wide open receivers for would be touchdowns. We had plenty of opportunities and I really I really just didn't execute. It's I feel like the way I'm feeling its pretty black and white right now just did execute and that's really all comes down to three turnovers. Four fourteen points. For them off turnovers and that's that's really about it. It just didn't execute. You said, you didn't execute three times I. Guess that's one for every turnover. Moen's was eighteen for twenty six in the night for two hundred yards and a touchdown. This loss is disappointing because the team had been playing so well after consecutive wins against the giants in jets in New Jersey. So Kyle Shanahan was this a letdown game I was worried about that a little bit on Monday, and Tuesday, on the kind of went away that we had a good day of practice on Wednesday not so good on. Thursday but I thought we came back and had a good Friday Love the energy of the guys at the hotel last night I was expecting us to come out and play good Miss a few. At the beginning to a couple opportunities. So I want to say that that was a letdown guys just their energy are everything but we definitely didn't play well today before the niners ran seventy plays and outgained the eagles four, seventeen, two to sixty seven in the game couple of other performances worth mentioning George Kitto playing for the first time since week one, fifteen catches on fifteen targets one, hundred, eighty, three yards, and a touchdown and Brandon. You had a fantastic thirty eight yard touchdown run where he hurdled the defender right before going into the end zone. Soap the forty niners or two and two, and once again in last place in the NFC West Hey Fred Warner what now pissed off, you know were upset for sure the fact that we're only two at home you know there's got to be a sense of urgency guys gotta be executed a lot better I i. Look My Saga I look at myself in the Mirror starts with me on defense you know everybody's got to be better. that. Can't happen. We always give you something to read something to watch and something you might have missed something to read on this Monday, pick your poison today Marcus Thompson the athletic about missing Jimmy Garoppolo or you could go NBC Sports Bay Area Find Jimmy Jeez value basically anywhere. You look you can find out how bad nick mullins was last night something to watch has to be the health of Jimmy Garoppolo he's recovering from a high ankle sprain suffered against. The jets here kyle when asked how optimistic he was the Jimmy would be back next week not sure totally I didn't talk to him today about how it went We'll see tomorrow when he comes in I know I have a good workout here Monday and Tuesday, and hopefully he'll be good to go. For Wednesday but I'm not sure this is just your reminder that the forty niners are twenty and six when Jimmy Garoppolo starts and five and. Twenty one when he does something, you may have missed at one point eagles. Defensive Lineman. Me Jackson may have pulled off the move of the game with the forty niners trailing and the ball at the one yard line. Jackson. Waited for the officials to turn their heads after spotting the ball and then slid it backwards with his foot about six inches. I don't think anybody in a forty niners even noticed nicely done. That's going to do it for. This edition of stats and eggs. If you want more on this game, download the instant reaction podcast hosted by me where I get really angry about a terrible performance by the team. If you like what you hear please rate review and subscribe to the Podcast, we love five star reviews and course good comments. But if there's something you think we should do better. Let us know and we'll try and be better I'm rob. Stats. Carreira. We'll talk tomorrow.