The Rocky Mountain Top of the Rankings, Duke-Virginia Thoughts, and Cutting It Up With "Buzzcut" Brad Davison | One Shining Podcast (Ep. 84) 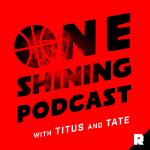