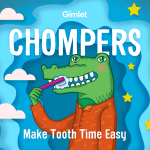 Chompers is produced by gimblett and supported by good night's the number one night time underwear welcome back. It's it's never trumpers your morning and night show depressing on the top of your mouth on one side and brush all the way those molars into its world records week and tonight. We've got more silly jokes so get ready to break this. Morning's laughing record pretty good start. Here's your first joke. Why do the world's tallest man quack doc well. He was constantly being told to duck switcher brushing the other side of the top hop of your mouth and brush the inside outside and chewing side each. You'll be no a duck as a bird that goes but when a person listen ducks they're bending down so the tallest man in the world might have to duck to move through small doors or places with low ceiling and someone might ask him to duck or bent to give him a kiss. There's no need to quack that it <music> richard rushing to the bottom of your mouth and don't forget your front teeth. Here's your next joke after eating the world's largest pizza. What did the world champion eater do next. She took the world's longest nap. Get it because sometimes after a big big meal. You need a big nap. Shh switzer brushing to the other side of the bottom of your south tongue brush to you. Here's one last joke before you go not enough. The world's most repetitive knock knock joke. Most repetitive knock knock jokes new knock knock news there world's most austria petted if not not joke repetitive knock knock jokes to knock knock world's most repetitive not not joke <music> knock knock joke knock knock the world's most repetitive knock knock joke <music> campers today done a great job laughing and brushing until next time chompers is a production of gimblett media chompers is brought to you by good night's the number one night time underwear good night's delivers protection where children needed the most grownups grownups. You understand the importance of great fit. There's nothing like the confidence boost you get from looking good and feeling good but when your kid experiencing nighttime wedding that confidence competence can go out the window especially when training pence don't fit luckily good night's. Has you covered with nightime underwear. That's fit for kids with leakage protection and a great fit good night's. Give your kids a confidence boost.