FROM THE SB NATION NFL SHOW: Panthers in the "hot spot" of the top 10 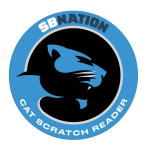 The following segment is from monday. Football monday on the sp nation. Nfl show where we're discussing. Your favourite teeth subscribe to the sp nation nfl show. Don't miss conversations like this one a few weeks ago on march twenty ninth. That was what four weeks ago. Something like that you and is you and i on monday football monday. We did a projection of the top ten picks and the 2021 nfl draft we stipulated that there would be no trades in this particular exercise Now at the time. Sam darnold had not been traded at the carolina panthers. San francisco already traded up for the third overall pick. But could you could you kind of explain my missing anything. This was the exercise that we conduct right. I think draft season began to heat up. So we said okay. Let's do a mock draft of the top ten and now that we're here draft week is upon us. We're mocking the mock baby. You mentioned what people are saying. Nfl networks. tom pella. Sarah because let's accept it. Fine one of the receivers were right. There it's not going to be. It's going to miami Nfl networks tom. Sarah on monday morning talked about the next two picks pete picks number seven and eight belonging to detroit and carolina as the quote. Hotspot here is what tom had to say. Well they'd be hot. Spot right now is at the bottom of the top. Ten specifically the lions at seven and the panthers at eight have been fielding a lot of phone calls that makes sense because when you look at carolina at eight as well as the broncos at nine both those teams are threats to potentially take an offensive tackle or maybe even a quarterback so if you want one of those two positions you may have to get ahead of them. So who's calling the move up. I can tell you that. The eagles have made a lot of phone calls. Although that's how he roseman he calls everybody every year about every pick just to see what it would take. The vikings have been active working the phones. That would probably be one of those offensive of tackles ends up sliding and this is an interesting one. The patriots have been calling around in the top ten and teams that have gotten those calls that their target would be. Ohio state quarterback justin fields. Now it would cost the patriots a lot to move from fifteen up to seven or eight probably something in the region of a second round draft. Pick that as a small price to pay. If new england sees an opportunity to they. Potential franchise quarterback. Okay lied to digest their hotspot nonetheless. We gave the carolina. Panthers p trae lands because again they had not traded for sam darnold at the time that we did this exercise. But that's not going to happen but they are. I think because of that candidate to trade. Back but i i do feel like panthers hand be really pissed because like okay we dealt with the year one of matt rule. There's growing pains associated with it. We said goodbye. The camera like we we gave you the you know. The rope gave you the leniency for your one. Now we got a top ten pick like we expect something substantial and you just trade out of it like i think you know you can only you can only like business futures so much so i kind of think. Carolina has to sit in pick your but maybe the offer would be substantial again specifically of justice fields. Were there although i mean. Carolina was kind of the most quarterback needy team in the nfl. prior to the sam darnold trade. Not that that really moved the needle and so if they themselves are passing on just may matt rhule's comments they're all in on darnold and maybe not in the long-term past the two years but there are at least gonna give him an opportunity to have a second shot at the nfl fry. Maybe this is justin fields to new england justin fields to chicago Whatever the case may be and not obviously getting to denver. I would think it would be interesting if denver sense that and traded up to seven with detroit. Like jump to this spot. You know what. I mean For the for the purposes of securing whether it's just in fields whatever the case may be but if carolina sits you can hear the rest of this conversation by subscribing to the sp nation nfl show. Wherever you get your podcasts.