336: How to Think Like a Front-End Developer with Ben Frain 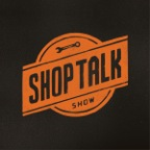