Pelosi on Trump: "I want to see him in prison" 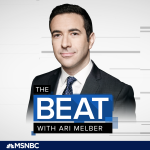