BTM111: How to Profitably Overpay for Real Estate with Nick Prefontaine 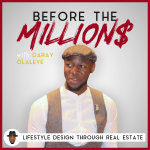