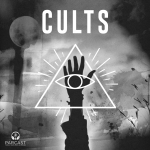 Welcome to cults daily throughout the month of April. We're addressing the manifestoes and ideologies of some of history's most infamous cult leaders he was born has Chisel Matsumoto later known as Shoko Asahara Leader of the Japanese Buddhism inspired cult. Alm Shin Rico. Asahara and his followers didn't just foretell the days but rather took it upon themselves to white humankind off the face of the earth. We hope you enjoyed this episode. Don't forget to come back tomorrow for a brand new edition of cull daily. Listen free on spotify or wherever you get your podcasts. On March Twentieth Nineteen Ninety Five members of the Japanese doomsday cult. Amish Enrico infiltrated the Tokyo Metro system and released a toxic chemical gas. They had already carried out. A number of lethal terrorist. Attacks Chemical Warfare and bioterrorism were their specialties. But today would be their most successful strike ever. It was rush hour in Tokyo and in five coordinated attacks on three major subway lines. The group killed thirteen people critically injured another fifty and cause vision loss in. Nearly one thousand murder was a form of mercy to the oems. Shinrikyo in death. Their leader Shoko Asahara absorbed your sense into his body and freed you from the material world and whether you perish today not in their tax. It really didn't matter. Armageddon was right around the corner. Hi I'm Vanessa. Richardson and this is colts. Apar- cast original. This is the sixteenth episode in our Daily Series on the strange prophecies made by different cults and their leaders throughout the month. Were taking a daily look at the myriad of apocalyptic predictions to try and uncover. What makes these revelations so appealing? I'm here with my co host. Greg Paulson Hi everyone. Today were discussing Shoko Asahara. He believed that the world would end in a nuclear war instigated by the United States. All of humanity would turn to ash except of course those who followed him in Nineteen eighty-four Asahara started option rico out of his single bedroom apartment in Tokyo and it begins simply enough as classes. On Yoga and meditation over the Next Five Years Uh Sahara grew a small but devoted following then in one thousand nine hundred nine. He applied for official status as a religious organization. Though the application was originally denied it passed after an appeal the group's new status created a sense of legitimacy that was critical to their growth and public perception. Though Sahara's belief system evolved over time it was always an amalgamation of other doctrines. He pulled from forms of Buddhism Yoga Christianity and Hinduism. Even the writings of nostradamus. The Hindu Goddess Shiva was considered one of the group's most important idols ultimately however his rhetoric and teachings were dominated by Christian millennialism. This belief stems from the book of revelation the last book of the New Testament of the Bible that includes the Apocalypse Judgment Day and the second coming of Christ. The book of revelation alludes to a number of prophesied monsters including a seven headed dragon. A serpent and the beast for some reason. Asahara became convinced that the United States was the beast and that they would bring about the apocalypse by starting a nuclear world war three nineteen ninety-two. Asahara publicly declared that he was Christ. The Lamb of God the second coming. He was fully enlightened and able to share his wisdom and powers with his loyal followers. Curing them of illnesses and absolving them of sin inside the organization rituals and practices of the Omb Shinrikyo allegedly included hallucinogenic drugs and shock therapy. Once a member of the cult tried to escape and their brother was allegedly killed in nineteen ninety-three. The group tried to develop deadly strains of anthrax hoping to create an epidemic and instigate their own apocalypse before the United States could. Luckily it didn't work. But the following year the Ocean Rikio were able to develop effective chemical weapons like the nerve agent. Seren and vieques gas they were used in a number of terrorist attacks that killed around ten people and injured hundreds still. None of their attempts were as deadly as the strike on the Tokyo Metro system following that attack in March of nineteen ninety. Five police were able to arrest more than one hundred. Fifty of the group's members and leaders including Sahara. He was later sentenced to death alongside his followers. In the group's headquarters police allegedly found enough chemical weapons to kill more than four million people. The nineteen ninety-seven Armageddon. Asahara predicted may never have happened. But today the option rikio live on under the name. Alaw protected by their status as an official religion. Thanks for listening. We'll be back tomorrow to examine the predictions of another cult. You can catch our other episodes of cults for free on spotify or wherever you listen to podcasts.