Life During the Coronavirus, and a Conversation With Conor Dougherty About the Complexities of the Housing Crisis | Larry Wilmore: Black on the Air 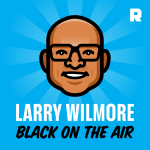