Shaq and Stephen Jackson talk about Draymond Green, the NBA's status and Jordan's dominance on The Big Podcast with Shaq 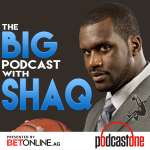