EPISODE #804 "Between The Rock And A Hard Place!" The Radio Adventures of Dr. Floyd 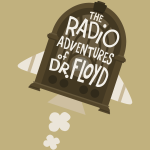