FROM THE SB NATION NFL SHOW: The Off Day Debrief reacts to the Giants loss 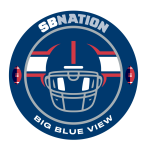