LCB Ep. 259 - Top 10 Favorite Cereals, Is HBO Max Worth The Price? and Reviewing The Wrong Missy and The Lovebirds 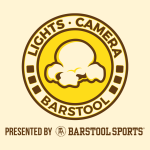