Introducing The Cut on Tuesdays 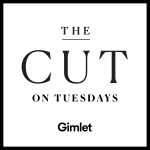 All right. Let's go first. You're hearing a room filled with some of the sharpest women. I know I'm Molly Fisher, and these are my coworkers at the cut every week. We meet to discuss what's on our minds, the news lives what we're reading and watching also other stuff. I was in a see if they could reach out to smash mouth and see if they do a guide, oral sex. After that, Jake collared story came out. He was like, I don't go down women's national like we do. Reach out to them about. And the topics we can't stop talking about the conversations. We keep coming back to wind up becoming the stories you read on the site. Now, returning those conversations into a podcast. And I'm going to host it. From the cut and Gimblett media. This is the cut on Tuesdays every week. On this show. We'll talk about the lessons. We've learned the hard bag thing that no one tells you all these conversations about like women should be leaders that people hate you to be leaders be supremely comfortable with a lot of people disliking you. We'll tell stories that we can't believe happened in the first place. Oh my God. He said to me, we should consider Dopp thing because he was worried that if I got pregnant again, I would just never lose the weight of the least altruistic rationale for adoption effort. We'll grapple with the uncomfortable realities of women's lives. I mean, I've never had a black BAAs ever and I probably won't ever and I think that's crazy and we'll try to figure out how we got here to all the rage radicalism and posssibility that women are feeling in two thousand eighteen. It's hard to describe how there was no feminist. Yes, it was Madonna crawling around a wedding, dress humping the floor, and Camille Paglia writing about Madonna's relationship to feminism like Madonna's what we had and all the arguments could fashions reflections and dissections that continue to obsess us the way we talk when we aren't worried what everyone else thinks. Yeah, who among us hasn't been drunk at a Walgreens or Rite, Aid or CVS? And I was like, you can't divorce me in secret. Most happy when miserable to express her anger is to disrupt continued power. The people were angry at knowing triggered, I'm fucking mad. The cut on Tuesdays, premiers, October, sixteenth, subscribe. Now for free. Wherever you listen, we'll see you next Tuesday.