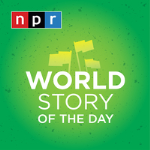 Support for this podcast and the following message. Come from Comcast business having the nation's largest gig speed network was just the start. Now, they're providing gig fueled apps and solutions that exceed expectations and help businesses perform Comcast business beyond fast. India announced today that it has successfully tested a satellite killing weapon. NPR's Jeff Brumfield has more on the test. And what it could mean for the region. Indian prime minister Narendra Modi announced the test and a national address hot up the arch up on our nam underage. He says that India now stands tall as a space power VIP. Wondering is a political scientist to MIT? He says the test apparently used an Indian made missile to strike an Indian made satellite. They launch a missile from their missile test site and intercepted the satellite, which was in orbit at three hundred kilometers in space three hundred kilometers or one hundred eighty six miles. Actually, a relatively low orbit. No pun intended is relative low hanging fruit in terms of a kill. But you know, it is it's only the fourth country. That's demonstrated a set capabilities. The other three are China Russia in the United States Brian Weeden with the secure world foundation. He says there's an anti-satellite arms race happening right now. And there are no arms control treaties to stop it organizations. Like the UN regularly talk about limiting weapons in space. But the really hasn't been any serious discussion about dealing with ground based and light weapons. We didn't says the main danger is debris that can be created by hitting a satellite a two thousand seven test by China's speed thousands of fragments into orbit many are still up there. So the concern would be that if there's a future conflict, which weaned US, China US, Russia, India and China or even Indian Pakistan that these weapons might be used. And lower orbit might become filled with deadly shrapnel that could knock out other non-military satellites VIP in Narang says he sees another purpose behind India's test today to strike the satellite. The Indian military used to kind of missile designed to intercept other missiles hitting a satellite is similar to striking incoming warheads. So the tests may actually be about missile defense. If that's the case, then it's also designed to send a message, they'll say, it's not directed towards any other country, but this is clearly relevant to Pakistan. That's Jeff Brumfield. And you're listening to all things considered.