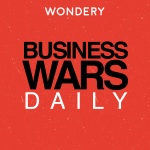 This episode of business wars daily is brought to you by sent pro online from pitney bowes shipping and mailing from your desk is never been simpler than with sent pro online from pitney leabeau's. Try it free for thirty days and get a free ten pounds scale when you visit p._b._a. Dot com slash b w daily they uh from wondering i'm david brown and this is business words daily on this tuesday august sixth the market for seltzer answer has never been bubbler so does suffering from its obesity causing reputation so much so that many dieters feel that giving into a single can as a slip of i say overeaters anonymous proportions so does dangerous reputation has been carefully cultivated by public health experts alarmed at the ballooning size of america's because kids at the same time many of us became concerned about the chemicals in diet soda leaving many wondering where to turn for fizzy fix well where else but to carbonated low or zero calorie water seltzer is now so trendy that the new york times dubbed it the drink of summer twenty eighteen nineteen so you'd think that market leader lacroix would be enjoying our new found mania not so the fizz has suddenly gone flat for the thirty year old company as a host of competitors rise to the top. If you're not familiar with lacroix you may have seen it's lemon lime and grapefruit flavored beverages in the grocery store in encasing cans almost neon in color just a year ago new york magazine reported that with thirty percent of the two billion dollar market. There's little doubt that lacroix has won on the seltzer wars now. Wait a minute not so fast since then one scandal after another has plagued national beverage corporation the brands owner i it's eighty-three-year-old c._e._o. Was accused of sexual assault. He denied the allegations then last october. A consumer filed a class action suit against lacroix claiming blaming its natural ingredients are natural at all and that the seltzer contained some chemicals that are also used in get this cockroach poison lacroix of course i in is these allegations to for the record the scary ingredient called lines'll is a common when found in sixty three different spices popular or science magazine debunks not just the claims about linda lual but the rest of the lawsuit is well but still the damage was done and lacroix's headaches worsened person in june of former employees filed another lawsuit alleging lacroix had intended to claim its cans were b._p._a. Free before they actually were and that he was fired for protesting the plans. The bad press has been so toxic that an investment analyst recently described lacroix's trajectory going from from bad to worse to disastrous in the meantime a little massachusetts company called spin drift after the mist created by waves and the wind he is gaining traction funded by venture capitalists spin drift uses no artificial or even so-called natural ingredients instead it squeezes actual actual fruit into it seltzer and purposely displays whatever calories the fruit ads from three calories for lemon to seventeen for grapefruit claiming those calories orissa's part of its marketing plan which stresses how real the beverage is chemicals have no calories but fruit does although tiny in comparison to lacroix oy spin drift is zooming ahead according to the new york times it predicts revenues of one hundred million dollars within a year up from only thirty three million in two thousand seventeen gene why because it has tapped into our growing obsession with clean eating and drinking reports aptly named vox writer rachel sugar sugar <unk> went so far as to call the spin drift nutrition label a twelve ounce raspberry lime flavored reflection of our changing values. Well in one form or or another seltzer has been around for centuries. Its popularity has attracted so many rivals. The market is overcrowded which means someone maybe lacroix you will soon. Have all of its bubbles burst brahmachari. This is business wars halos. Do us a favor and tell us more about yourself. Just visit wondering dot com slash surp- we appreciate we really do. I'm david brown back with you tomorrow. This episode is brought to you by central online online from pitney bowes shipping and mailing from your desk has never been simpler than with sunpro online from pitney bowes with simple online is just click send spend and save for as low as four dollars ninety nine cents. That's right four dollars. Ninety nine cents a month. Send envelopes flats and packages right right from your p._c. And you were back to business in no time. Try for free for thirty days and get a free ten pounds scale but only when you visit p._b. Dot com slash b w daily that's p._b. Dot com slash b w daily.