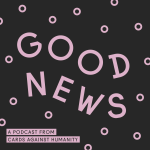 I'm calling your host of the good news podcasts and I'm neil the other host the good news podcast is your source for Good News Fun Stories Auditory Delight and Sonic Joy on today's episode where giving you guys another one of the wiki women entries as we've mentioned before the show. Wikipedia is one of the most popular websites in the world. It can get over thirty. The million views a day but studies have found that between eighty four and ninety one percent of the editors are male so there's a lot a lot of entries in there about men because they're written by men so women saw this. There's more women editors on Wikipedia now to showcase we men and women's achievements I'm GonNa tell you guys about Kimberly Bryant so Kimberly Emberley Bryant is an African American electronical engineer most notably Bryant founded Black Girls Code in two thousand and eleven black girls code. It is a training course that teaches basic programming concepts two black girls who were underrepresented in technology careers additionally the organization offers offers programs in coding as well as website robot in Mobile Application Building African American women make up less than three percent of the workforce in the the tech industry and black girl codes fights to change and improve this percentage for the better organization has a major goal of teaching a million girls of Color Dr to Code by Twenty Forty in twenty fourteen Bryant was the recipient of Smithsonian Magazine's American Ingenuity Award for social progress as of this recording black girls code has reached more than eight thousand young women in fifteen chapters around the world. Are you interested interested. Do you WANNA learn more. Do you know a little girl who wants to learn stem checkout. Black Girls Code Dot Com. Thanks for listening. Do you have good news incredible or maybe WANNA. Tell L. is a joke or idea excellent email us at hello at the good news podcast dot f. m. or leave us a voicemail at seven three two one seven zero one five six you can also tweet us at the Good News Pot and follow us on instagram too and if you love the good news podcast had cast think about supporting us on our patriarch page. Most of our music is by Paddington bear the.