Heather and Lindsay were "over served" on Halloween!! (by themselves...) Hear all about it on this HDW BONUS episode!! 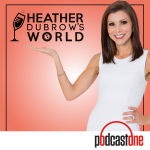