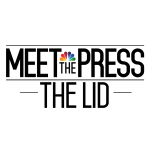 Welcome to the live from meet the press. I'm Carrie, Dan? The very first democratic debate two nights of it starts two weeks from today, hosted by NBC MSNBC, and Telemundo nine to eleven pm. And yes, I think I'm contractually obligated to sail that so let's talk about something we've talked about before with this democratic field, which is lanes. That song, always makes me feel like it's two thousand seven again, simpler times, anyway, pundits talk a lot about Wayne's when it comes to the twenty twenty race. Because in fairness, there will be twenty candidates total participating in the two nights of debates, which makes this whole lanes highway analogy pretty much seemed like the freeway in LA. At rush hour end I should note. There are other people who find the lanes analogy kind of oversimplified like, is there, a lien for the biographies of candidates, all the candidates of color and women, and then all the white guys on the other side, so many white guys or is about age? There's the older candidates and the younger ones, or is it about a specific policy issue, like say where people stand on Medicare for all, or is it just kind of about personality? Like does Elizabeth Warren, get her own lane, just for being the person with the most specific policy. Plans compared to everyone. Else, all of those things kind of overlap, which, yeah, I see the argument the whole lane, -nology seems very much over-simplified at times. But rather than sits in our towers, and try to assign lanes. We can also listen to what voters are actually telling us in public opinion polling, here's something that we noticed in a new Quinnipiac, poll, the came out yesterday before you ask. Yes, they're horse race numbers. Yeah. There what you'd expect Google it if you're dying to now inside the numbers, though, we noticed this, the poll broke down democratic voters by their ideology, and among people who call themselves, quote, very liberal to candidates stood out Bernie Sanders, and Elizabeth Warren. Here's the thing. They're both drawing. Exactly the same share of liberal voters both at twenty nine percent way below them are Joe Biden and Pete Buddha, JR. And then everyone else in the field is under. Three percent with lefty voters, which kind of puts Bernie Sanders and Elizabeth Warren in the same kind of lane there. Each pulling exactly the same amount of support from their core group on the left wing of the party. So if you're either one of them, you have to hope the other one collapses. Right. And you have to hope that one of those other three percenters on the left side of the field doesn't have a breakout moments. Maybe in the debates that could eat away at your core support remember candidates don't know, until tomorrow, who they're going to be on stage with because the debates are, of course, broken up over the two nights. So if you're Sanders are Warren, do you want to be on the scene stage, or do you wanna be on different nights? These yeah, they're big stakes. Seriously? No pressure guys. That's good for us. If you let hear more of this audio briefing, you can add, meet the press the lid to your flash briefings on Amazon Alexa, devices or just down the as a free podcast.