Expanding Your Office at Home? There Could Be Tax Breaks 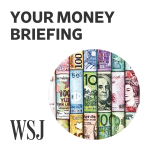