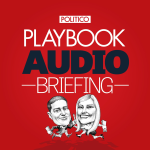 Good morning. I'm Jake Sherman and welcome to your political playbook audio briefing. Stay tuned after the show for a message from every town for gun safety. And I'm Anna Palmer, we've got some news this morning representatives for Michael Bloomberg are looking at seven World Trade Center and the old New York Times building in Times Square as headquarters if he barks on a twenty twenty campaign, according to sources familiar with the matter the potential campaign, which is already interviewing staffers would consider leasing approximately thirty thousand square feet of office space, according to the sources, Bloomberg will decide and March if you will enter the race spokesman for Bloomberg declined to comment the summit with North Korea has broken down. And Donald Trump is on his way back to Washington to AP's reporting that the Trump Kim summit collapsed as the two sides failed to reach a deal over US sanctions on North Korea. Trumpeted news conference blame North Korea for it system that all sanctions be lifted without the country saying it would eliminate its nuclear arsenal. Trump said talks would continue, but he would. Commit to a third US North Korea summit, so far the two meetings have produced no appreciable results on the ground in Hanoi. The New York Times describes the hectic scene where reporters were frantically looking for an explanation about what happened and Eliana Johnson who was in Hanoi for us has a color piece on how Trump's summits are a smashing success on Sean Hannity's Fox News program. It is also worth noting most news outlets. Did that Kim Jong UN took a question from a foreign journalist a first back stateside spotted Brad par. Scall- Trump's twenty twenty campaign manager yesterday morning on a jet blue flight from DCA to Fort Lauderdale. He was watching the Coen testimony from his seat and listening to it exiting the plane into the terminal yesterday was a huge day. So we wanted to take a moment to take stock of what went down in short Republicans are having a tough time. Getting accustomed to the minority and Democrats are having a tough time getting used to the majority Republicans spent all day yesterday trying to tarnish Michael Cohen as a criminal something he has. Conceded was true. And something view Jay has already proven Republicans were privately saying that they were worried they were scattershot and hadn't landed a big time punch in their one opportunity to go after Cohen Democrats. Meanwhile, got beat again, my House Republicans on the floor losing a procedural vote in another example of the Demler ships inability to strong arm their caucus, Heather gold. John president Hanan Sarah Farris report that Democrats are now weighing a rule change to make it harder for Republicans to spring surprise procedural votes on the majority dared Cibulka, Josh Gerstein in the Nita Kumar have the story on Trump's inner circle sustaining collateral damage in the cone hearing, the do countdown is there any chance. Democrats don't ask Donald Trump junior. Eric Trump of vodka Trump in Alan Weisselberg to testify, and this is a walk back of we've ever seen one Florida. Congressman Matt gates tweeted last night. I personally apologized to Michael Cohen for referencing his private family in the public square, regardless of disagreements family members should be. Off limits from attacks Representative senators and presidents, including myself. Let's leave the Coen family alone. Meanwhile, Heather Caygill, Sarah fares, and Melanie Zona report the Pelosi and top Democrats aren't going to bite on calls for Trump's impeachment. Despite the comb bombshells, they still want to wait for Robert Muller and Burgess Everett and James Arkan. Have the latest on Chuck Schumer's plot to try and get Senate Democrats back in the majority Schumer told them there's going to be a fervor. I think for taking back the Senate this election the way there was taking back the house in the last one subscribed to playbook at politico dot com slash playbook gun violence claims one hundred lives in America each day for too long change has been thwarted by the gun lobby. Politicians who refused to take commonsense steps that will save lives. But this week we brought change to congress. The house voted to stand up to the gun lobby in stand with the millions of moms law enforcement officers teachers. Survivors gun owners students mayors and everyday Americans fighting for change that will save lives. We think the house for passing the bipartisan background checks act and now call on the Senate to act. Learn more at every town dot org.