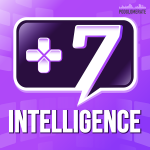 Hello everyone. This is chess with a quick plus seven intelligence announcement. I'm recording right now. It is the morning of Sunday. The eighteenth of November this evening, I'm going to be recording interview live on twitch for the first time on the plus seven intelligence twitch channel I'll be talking to a developer that has built in support for charity into the micro transactions in their game. That'll be just a few hours after I put this into the podcast feed. So hopefully, you'll be lucky enough to have caught this episode or cut the mentions on social media about it. So that you can join in check out what it's like to record an interview live on twitch definitely be interested in some audience questions and some onions comments so feel free to put those into the twitch Chan or into the discord or even on social media. I'm really interested to hear your thoughts about it. And even if you missed the livestream don't worry because this interview will be turned into an episode. Oda plus seven intelligence, and they'll actually make up the seventh episode of the games and social change series. The live is going to start at six oh, seven PM eastern. The link is going to be in the show notes of this episode. Although I'm sure all of you have already subscribed to twitch dot TV slash plus seven intelligence. That's today. Thanks for listening. And I'll see you in the last dream.