Mornings with Keyshawn, LZ and Travis (HR 3) MLB has another plan in place to begin the season but some players are opposed. 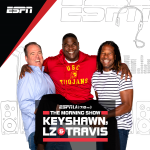