Playoff Basketball Is Back: Breaking Down Jazz vs. Nuggets, Raptors vs. Nets, Sixers vs. Celtics, and Clippers vs. Mavericks | The Mismatch 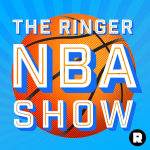