Between the Scenes - The Daily Show's Emmy Nominations 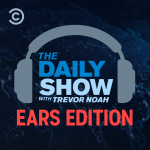 You're listening to comedy central. I'm like internally grateful. Every single person who watches the show comes to the show like this. I'd never i'd never i don't i never not count my blessings. I should say like when it comes to being here doing this thing it's it's wild to be nominated for emmys like i remember a time where it's just like. We're gonna we'll be here tomorrow. I don't take any of this for american t._v. You then then you're not you know so. I i don't ever be like we do. I remember the first time we've got nominated for an emmy and we went to the emmy awards and then like someone came in k. Man sorry you you must be bummed that you lost cost the moment i met the emmy nominated for and i must have you shall love joan olive like part of the reason listen i said yesterday. This job was because of jolla like before him. I was like you can't do american t._v. With an accent and then i saw him like that guys one of my idols he's phenomenal. I watched him on the david. Thank you know every day. Is you know when people focus on the wrong things in life and be like you lost like no. I want you know it's like. I remember like oneday sunday. I met someone who had run the olympics and came third and like people were would like shitting on him like online. He was like yeah you know. I thought it was gonna win and then people would dissing me and whatever and i feel so shits and you know i wish i want my friend you came third in the olympics and he's like yeah but people offers like if i came third in the olympics that anything there's only two people in the world who can talk to me the everyone else. I don't wanna hear it's the daily show with cumbernauld. No no here's a dish watson availa weeknights at eleven ten central on comedy central and comedy central apple watch episodes and videos at the daily show dot com what's on facebook twitter and instagram and subscribe to the daily show on youtube exclusive alton and more. This has been a comedy central podcast.