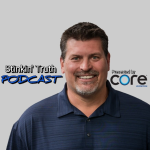 It's a stinking truth. PODCAST CREEK HIT. And this is interesting because there are so many teams that kick the can down the road and are afraid to just basically say we got a we got a strip it and build it back up want to slap bandaids on right they wanna slap band aids and tell her fans they look we're closed. We just sign this guy is gonNA put us over the Tub all were won't we're one big time receiver away from yeah. No, you're not no, you're not you're not and I was told I was in their facility in Oakland is two years before they moved to Vegas. They're just said, hey, listen man this where we are I think this is two thousand seventeen. To. This world where we stripped this damn thing down to the studs in rebuilding. And Mike Mayock be in the general manager. His Dad was an old line coach. He said we're GONNA build this thing inside out. We'll take care of our law and take care of our D. Line Front seven on defense. That's what we're GONNA do that's how we're going to build this thing, and then we're going to put the pieces in when they come to us you know on the outside and everything else and look what's happened. Trail away some big time players, Khalil Mack, and everybody else you know traded away got draft picks built their team the way they wanted to build their team and what's happened. In my mind you now. They're number one. Offensive tackle acquisition from the Patriots in Brown Riots Brown and Brown Brown. Minjah the first two weeks they've actually rotated two different guys over there right tackle and they've just dispense justice. They've just beat people up. That's what they do and I gotta give them. You know and I hate the raiders with the White Hot as even thousand sons as you well know but I gotta give them a ton of credit. That's a real team.