Conor McGregor, the undeniable force | Tony talks to The Notorious about his unwavering certainty, ruthless mindset and how he became the king of combat sports 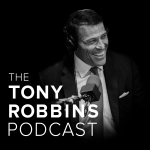