Special: Has Mexico's President Turned His Back on His Own People? 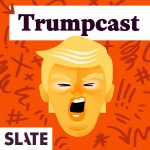