A glitch in the matrix & the world's biggest dumpster fire! 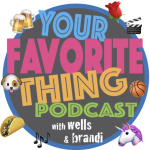