My Favorite Murder Presents: Tenfold More Wicked - Episode 1: All That is Wicked: The Schutts 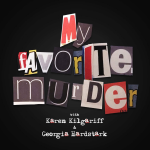