California Teachers Pay For Their Own Substitutes During Extended Sick Leave 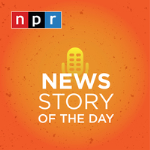 Imagine having to take time off work to get treatment for cancer. And then imagine having to pay for the person who fills in behind you. That's the situation a California Public school teacher finds herself in a nineteen Seventy-six state law requires her to pay for the substitute teacher, who is taking her place, as more people hear about her story momentum is growing to change that law, and more. Teachers are coming forward with similar stories from member station. K. Q. E D. Julia McEvoy reports Heather burns was teaching at an elementary school in San Francisco in twenty sixteen. She just had a second child. Just bought a home with her husband. I was doing self breast exam. And I felt a lump and my mother, who was a retired nurse was over the house, a couple of days later, and she said, I definitely need to get it checked out. It was staged to breast cancer, she needed surgery, radiation, and possibly chemotherapy, then burns learned, she would be responsible for paying her own subs. Teacher while she was out on leave. It didn't really hit her until the first paycheck arrived. My paychecks were a thousand dollars a month take home less than half of her regular pay. Suddenly those house payments were out of reach they'd saved and scrimped for the house, down payment in one of the most expensive housing markets in the country. There was little left in savings was kind of one of those things that I'm sick. I just had surgery. I've just got diagnosed with breast cancer. My world is falling apart. And they just sent me my paycheck, you know, burns remembers how vulnerable she felt at the time really unequipped to try and get information out of HR, San Francisco parent, Amanda con freed is angry. Teachers are being treated this way, when she learned her school, teacher would have to pay for the sub while fighting cancer. My dodges dropped I couldn't believe it in a, I remained devastate that, that this is the law, and this is know something that teachers have been living with for decades. I think initially, I would say, I'm sorry, Senator Connie Leyva heads, California's education committee. Here's what she has to say to the states. Teachers, I'm sorry that we don't have a better system in place. But we're going to try to fix it. We couldn't help you but we're going to try to fix it for future teachers, but it's complicated. California doesn't mandate. Full pay extended sickly for any employer. Much less cash strapped public schools Leiva is working with the California teachers association to figure out a solution. Eric Hines leads the association could be an easy change of just, you know, just eliminate the law. But then there's a lot of unintended consequences to that. He says without additional state funding. The schools would have to pick up the cost. And when I say it's about money, of course when you're in an underfunded system, you're still robbing Peter to pay Paul. Hind says that's why the issue back ends into the larger narrative about how we as a nation value. Teachers that issue is galvanizing educators from West Virginia to Oakland to strike for. Better pay. When Heather burns returned to school that August still reeling from her radiation treatments. The very first day I was there, my principal really upset. And she said, I'm so sorry to tell you this. But you have a class size list of forty one students burns, says she felt sick and she was depressed but her family just couldn't live off Hafer, paycheck anymore for NPR news. I'm Julia McEvoy in San Francisco.