885: Front-Loading AND The Benefits of Keeping Your Finances Separate by The Mad Fientist on Tax Optimization 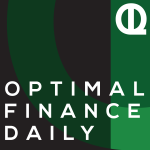