Judy Batalion: ...that strength and courage can be passed down through generations 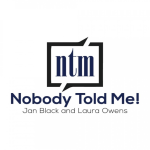