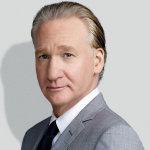 Welcome to an. HBO podcast from the HBO Latent Sees Real Time With Bill Maher. Wow audience so maybe you're happy. I know why you're happy. It's finally happened. Two hundred Seventeen Democrats and one independent have voted to open impeachment Richmond inquiries into president trump but people want to know what this is about same thing. It wasn't that last time in two thousand sixteen you can't try. I do get foreign help in an American election where Americans we fight amongst ourselves when it comes to help. You can't get foreigners to do it. It's very fundamental and trump did at this again. He called the Ukrainian President Alinsky. Okay and ask for a favor. You know it's always very mafia with him. All his phone calls sound like he's slicing garlic garlic trump said yesterday no no quid pro quo like he knows what that means two days ago. We thought quid pro. Quo was the president of Vietnam Tom but he he looks a little depressed about this one. I saw him yesterday. This press conference. I I hate dare use the term but he looked low energy. He really was sad sad. I it looked like he finally lost lost. The will to lie keeps calling this phone call. He had perfect br perk. What is perfect phone. Call for him. I mean he didn't drop the phone in the toilet. That's what a perfect phone but what's interesting think about the call and the transcript that we read yesterday is this president of the Yuka rains Alinsky. He apparently got the memo that the way to get whatever you want from trump is to completely kisses as he talks about each trump this great opportunity to learn from him and that he's using in trump's skills and knowledge to do his job. That trump is exactly that trump is a great teacher. I don't know if this constitutes increasing. I think it constitutes phone sex that the Republicans just look desperate defending this Devin Nunez remember him Devon Nunez Californians by no him because he's from here in California he claimed the Democrats tried to obtain nude photos of Trump Devon represents the San Joaquin Valley which is famous for nuts all right thank you very arts had shown new episodes of real time with Bill Maher every Friday night at ten or watch anytime H._B._o. On demand for more information log onto H._B._O. Dot com.