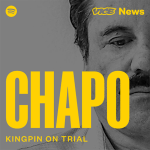 Imagine you get called for jury duty only instead of the form that normally comes in the mail. You get ordered to come down to the court and fill out a thirty four page questionnaire a thousand people in New York recently had to do this and of a hundred and eighteen questions. It's number forty eight that cuts to the chase. The question is the case for which you are summoned involves the defendant Joaquin Archibaldo Guzman, the water also known as El Chapo. Have you read seen or heard anything about the defendant the case or the people involved? Ball. Corey of America's war on drugs is Joaquin El Chapo Guzman also known as an chapel the short while chapel. Goes smiles like the old SAMA bin Laden top trafficky pits, the ultra violent ultra lucrative similar Loic drug cartel. So Ritchie lays the Forbes magazine billionaires lifts, you think both submarines airplanes marijuana cocaine heroin, meth capital of land, eskimo, El Chapo Guzman. He's like a God. His scape from a maximum security prison for the second time and tonight, it's hair. We are tracking a big development Mexican drug kingpin Joaquin and chapel. Guzman has been extradited to the us to face charges for his role as the head of the cartel. So you've probably heard of El Chapo, you may have also heard that last year he was extradited from Mexico to New York and right now he's sitting in a maximum security jail in Manhattan awaiting trial that could put him behind bars for life. This is the drug trafficking case of the century. I mean, the feds have been after chopping for decades, and they're throwing all their weight behind this prosecution. But this case is about more than I'll troppo guilt or innocence. It's about the entire war on drugs. So next month has troppled trial starts in Brooklyn. We take you to meet people you won't hear from the hitmen for hire. All. Steals and feel so choose people for money, the reporters who are risking their lives to get the story. Right. You wanna see the real thing? The the president launched Mexico's war on drugs. I demand to Americans stuck with Flo. Who stole the floor, the L tropics family. Oh my God. That guy looks. Trump was brother the DA agent who tracked him down that was the moment where it was like. All right. The hunt on now and the people caught in the middle. Chose some those on the kid and its work. You'll the were soldiers over were. But they do anything she asked. What are good for? If they couldn't protect your family. I'm feeding Hamilton. This is tropical from vice news coming over I exclusively on Spotify and available in both English and Spanish, believe me. This is beyond one, man. This is beyond one case of drug trafficking.