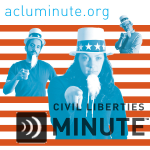 Here. You are nobody I'm Bill Newman. And this is the civil liberties minute, and that's what immigration and customs enforcement ice told Guadalupe Placentia who had been picked up by the San Bernardino, California county sheriff's office and handed over to ice because there was a ten year old court order to appear as a witness issued for someone with a similar name, MS Placentia kept protesting. She is after all and has been for decades a US citizens. She has nothing to do with immigration nothing and the agents in response mocked her and added for emphasis, you are nothing ice eventually let his Placentia go after her daughter showed the ice agents. Her mother's US passport waiter with the ACLU as her attorneys, MS Placentia sued and just recently, the federal government and the county sheriff's department settled her case for fifty five thousand dollars her ACLU of southern California attorney Adriana Wong said quote. San Bernardino county residents like MS Placentia have the right to live and work and raise their children in peace without fear that ice will arrest them without cause and the government should be held accountable. When it violates people's rights this case shows, fortunately, it's still at times the government can be held to account. The civil liberties minute is made possible by the ACLU because freedom can't protect itself.