Turner Novak The Past, Present, and Future of Consumer Social Companies - [Invest Like the Best, EP.182] 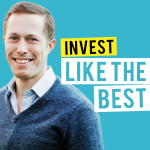