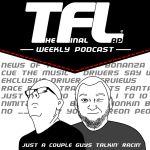 The final lap with kerry murphy is is on the twenty twenty one nascar daytona. Five hundred is in the books. Where on lap fifteen a massive wreck took out the pole sitter. Alex bowman while running. Second his teammate. William byron erico. Merola eric jones ryan newman ryan blaney. Martin tricks junior. Kurt busch and believe it or not many many others and then the lightning and rains came. We waited almost all day during the red flag. And when they came back to racing it was denny hamlin winning the first stage and later winning stage two as well all right now on the final lap. There was a massive fiery crash to the checkered flag to end the race when brackets laskey was pushed into his teammate and leader joey logano at the time. Let's run down the top ten and then we'll talk about the winner ten to one. Kyle larson coriolis joy jamie. Mcmurray ross chastain at number seven got ryan priests denny hamlin trying for his third daytona five hundred in a row. It was not to be finished. Fifth kevin harvick a former champion of this race austin dillon's same deal chase elliott searching for his first daytona five hundred win but he gets his best career five hundred finish at number two. To victory lane michael mcdowell fortieth driver to win the daytona five hundred for his first career. Win leading only the final lap of the race. Michael drives for not a mega super team. But a much smaller. Bob jenkins own front row motorsports eighth driver to get their first career. Win at the sport's biggest race dot com.