Important Announcement - The End of Sword and Scale 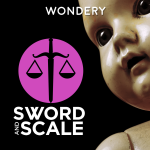 I just got off the phone with wondering, and I'm very sad to announce that we are no longer a wondering show in fact without advertising, we're no longer show at all after this recording. I have a call with my staff to let most of them know, they're being laid off today that means no season two of Mon Stroh. No more. This is war. No, more sorting skill rewind. And as it stands right now. No, more sorting scale. That's it censorship actually works. You get a mob to rally against you intimidate, those around you anyone who associates with you. Because you've been deemed a bad person who says bad words, the mob can sensory through intimidation through boycotts and other tactics. Just because they don't like what you say. How you set it? What Tony used? What words you used? I've been saying that for years there is a culture war going on right now in the United States and pretty much all over the world. It's not enough for this particular group of people to scroll pass something they don't like to unsubscribe from it. No, that's not the point at all. It's not about controlling what they hear is individuals. It's about controlling what you hear what all of you all of us here or see or say or think your words are no longer your words. Whether you think they are not there the words of the mob of the state, your individual liberties have been given up for the sake of pretending you're more virtuous than you are for the sake of appearances right now as it stands. This is the end we'll keep putting out plus episodes on patriot. On until we moved to our own platform, and then continue putting out episodes behind that pay wall, but certain scale the free show and all of the other incongruity media shows are coming to an end anything that was ad-supported is over now because of Aaron minke from Lor and Robbie Chowdhry from undisclosed who led? This boycott against me and my company because they didn't like certain things I said there have been many accusations against me over the years because I believe in independent thought, an independent speech. I don't talk like them. I don't say things in the pre approved way. They want me to say it. And when someone tries to tell me what to say, I tell them the fuck off while they don't like that. They don't like having their power challenged. So they attack your character. They used. Things that are out of context, especially screen shots to prove what a misogynist pig. You are never mind context never mind telling the actual series of events or circumstances behind these screen shots. Now, just collect them all and put them in a place where you could point people to a public forum such as read it, for example, where you can show people that it's on the internet. It must be true. That's what they do. And they do it to public figure after public figure that doesn't to- their line. So they went after my advertisers. And scared enough of them to drop me. But that wasn't enough. Then they went after wondering not just the company as a whole but individuals in that company, and guess what it worked, and I don't blame them. There's only so much. You can take so much pressure. You can take. I know other podcasters that have been attacked just because they're friends with me they've been personally attacked just because of their association to me as an individual because I've been deemed a bad person. I don't fall in line with their bullshit. I make inappropriate jokes. Sometimes I reposed memes that some people might find offensive everyone takes everything so seriously and loves to virtue signal about it online even a fucking joke. Name that I didn't even create it takes a particularly special individual to try to get a podcast or fired because they didn't like a reported joke name, but that's what people like Aaron monkey and Robbie Chowdhry are all about virtue, signaling online pretending they're better than everyone else. Acting like they're more and more. Oil more enlightened. Well, there you go. Maybe they are. Maybe I am an asshole. And I'm an asshole that you will no longer be able to hear because of these virtuous people now right now, I don't know what's going to happen. I wanted to come on here and tell you why we're not going to be putting out shows anymore and also to let you know that they're still away for you to support us again right now, it's still on patriots were moving off that platform because of this very reason we don't want someone pressuring patriots somehow to drop us because they've been offended by something. And that can very well happen. It could very well happen that were dropped off of patriarch kicked off Twitter kicked off of every platform out there Facebook YouTube, you name it because again, we don't fall in line with this common modern day thinking that you have to say things a certain way that you have to keep repeating the party line. That's just how I am. I don't let anyone else control might words. And so here we are. Where my words have now been silenced. Censorship. Works you go after someone online you get a mob behind you. You can take them down. Just like Aaron mckie and Robbie Chowdhry did to me. So that's it. Congratulations. You've silenced another free thinker. Good job. Now, you can go get offended by someone else. And silenced them to your work is never done is it enjoy your little battle. I'll see everyone else on patriotic. And thank you to those of you still listening.