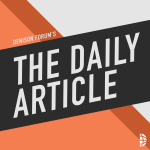 Really? The Muller report, Columbine and forgiveness. What Good Friday means today? This is Dr Jim Dennison's the daily article podcast for Friday. April nineteenth twenty nineteen. The long-awaited Muller report was released to the public yesterday. The reaction has been as partisan as we would expect the president's supporters and his critics are both using the report claim vindication for their positions. Analysts are already speculating on ways the parties will use it in the twenty twenty election cycle. We should not be surprised by this polarized response. Our culture has jettisoned absolute truth and objective morality, claiming tolerance for all viewpoints as our highest value. But this goes only halfway many demand that we tolerate their views, but feel no obligation to tolerate ours years ago, a wise friend explained to me, the three steps of political success one convince people they have an enemy to convinced him that they cannot defeat their enemy three convinced him that I will defeat their enemy if they vote for me or. Forgive me money or do whatever. I want them to do in our zero sum for me to win. You must lose culture. Is there? A better way forward. The twentieth. Anniversary of the Columbine massacre. Is this Sunday on the morning of April? Twentieth. Nineteen ninety nine two teenagers began shooting fellow students outside Columbine high school in suburban Denver. They killed twelve students and a teacher and wounded twenty others before killing themselves, tragically Columbine has become not just a name or an event but a category. According to the Washington Post two hundred and twenty six thousand students have been exposed to gun violence at school since the Columbine shooting at least one hundred and forty three children educators and others have been killed in assaults into other two hundred ninety four have been injured the threat to our students is clearly not over more than one hundred and thirty schools across Denver closed Wednesday as authorities search for a woman reportedly obsessed with the Columbine massacre in deemed a credible threat to the community. She was later found dead of an apparent self inflicted gunshot wound school shootings have become so common that a support group. The principles recovery network has been formed. Help principals who schools experience a such tragedy. How can the Columbine survivors and families of the victims? Best respond to Sunday's tragic anniversary, the answer is relevant not only to their grief. But to our polarized society, as well, Jesus instructed us to love, your enemies, do good to those who hate, you bless, those who you pray for those who abuse you. He also taught us to pray. Forgive us our debts as we also have forgiven. Our debtors does this mean that we do not hold people accountable for their sins. Absolutely not when someone sends against you. You are to go and tell him as fault between you and him alone. That's Matthew eighteen fifteen if he will not listen, you are to take one or two others along with you. If he refuses to listen to them tell it to the church, if he refuses to listen to the church, he is to be removed from the community of faith, if the senate's criminal nature, the state is to punish as an adventure who carries out God's wrath on the wrongdoer that's Romans thirteen four and the ultimate judge got himself. Never avenge yourselves, but leave it to the wrath of God for it is written vengeance. Is mine. I will repay says the Lord as Romans twelve nineteen says, according to the mayo clinic when someone you care about her chew, you could hold onto anger resentment and thoughts of revenge or embrace forgiveness and move forward. Mayor reports that refusing to forgive causes us to become depressed live in the past bring anger and bitterness into every new relationship and lose purpose in life, of course to forgive does. Not mean to forget those who survived Columbine can never forget that horrific day, nor does it mean to excuse the shooter's for their heinous crimes forgiveness means to release them to the God of Justice and honor the dead by living faithfully the same is true. With regard to the political animosity of our day rather than people exclusively on the basis of party or position. Let's see them as God sees them souls for whom Jesus died. Our gracious father calls us to be bold. But also forgiving you want us to speak biblical truth with conviction, but also to love those with whom we disagree on the first Good Friday Jesus prayed from his. Cross for those who nailed him there. He died for them. And for us as as as fifty three five says, he was pierced for our transgressions. He was crushed for our iniquities upon him was the chastisement that brought us peace and with his wounds. We are healed. Our savior was full of grace and truth. Let's follow his example today. To subscribe to the daily article via Email read any daily article. You may have missed this week or use any of our resources, please. Visit Denison Orum dot org. Thank you for listening to the daily article podcast today.