Fallout From the NFL Draft, Rookies of the Year, Most Punchable Face, and Andrew Brandt 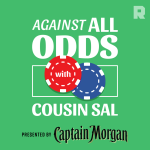