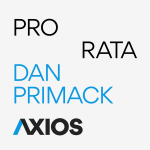 Hi i'm imprac host of axios recap. We are back with our special axios election. Twenty twenty coverage what we're watching is what's happening in pennsylvania which many people think will be the tipping point state for president trump or former vice president biden with me. Is emily previti reporter for w. f. an npr station in pennsylvania. And she's on the ground in luzern county which in two thousand sixteen went for president trump by twenty points after election after election going for democrats. So emily you're in luzerne county pennsylvania northeastern pennsylvania. What are you so far seeing on the ground in terms of turnout. Enthusiasm all the above. So we're seeing high turnout in lisburn and across the state based on what i've heard from my colleagues elsewhere and i'm getting a pretty even mix of registered democrats and republicans and even fewer unaffiliated voters. But some of those well. We have a better idea of who's voted by mail. As of yesterday the pennsylvania department of state data showed there are about two and a half million ballot have been returned and received by counties and of those nearly one point six million were sent by democrats around five hundred fifty six thousand by republicans so definitely a heavier. Turn out by mail by democrats. Those of us who are outside of pennsylvania how we should watch the results coming in tonight so for example as you said a lot of these ballots. None of the mail in ballots could be opened until today in pennsylvania will a precinct say in lisburn county or in philly or in pittsburgh. Will they report the quote on the ground numbers without yet reporting the absentee. Will they wait until they have a full count from their precinct. It depends on the county. And i know that some county is most of those that have a relatively small number of registered voters. I think the largest is cumberland with a hundred and eighty seven thousand and it goes down from there to one county. That has about two registered voters. There are several that are not even starting until tomorrow to count anything and so county is will post tonight tonight and then the plans for updating those numbers they usually do that at the end of the day is counting if we're to base it on practices during the primary which again was really the first one that substantial numbers of voters cast ballots by mail in pennsylvania and the only election that we have for a basis of comparison. So when i watch tv tonight and it says luzerne county reports. One candidate is up by ten points. There's a pretty good chance that that won't be the actual number when all of a sudden done correct what the environment been like in lucerne in those areas these kind of these trump heavy areas of pennsylvania in terms of both political ads but also conversation. This is a national election and these are very divisive figures to a certain extent are their local issues that are also at play here that are informing the national so. I'm not hearing that from people. I'm hearing people who support the president. Say that they like the way that you know what. He's done for veterans. They like the way that he handles foreign policy that they think the best hope for economic improvement would be another four years of a trump presidency and honestly a lot of people who support biden. When you ask them why it's basically that he's not the president and then they have critiques of the president to share. So i'm not hearing a lot of pennsylvania's specific hyper local issues. From voters as far as dictating their choice for president. You get a sense that they feel that their vote. This year in this election matters more perhaps than their votes have in the past because so many people seem to think the outcome is going to rest on. What pennsylvania does no one's really indicated that they've just sort of some people comment oh all eyes are pennsylvania but it doesn't really seem to be something they're thinking about too much. It seems that they like everyone else are just very curious to know what the final outcome is going to be aren't so concerned with whether voters elsewhere are going to be paying a lot of attention to pennsylvania. Emily final question for you. There have been some reports coming out today. Sources with trump campaign suggesting that they are at least a little bit disappointed by their. Get out the vote results in pennsylvania. You said you have seen good. Turn out strong turnout in lucerne. Which again is a red area. Is the turnout the in person turn out what officials locally were expecting it to be a little more less turnout his high everywhere but i also think election officials expected turn out to be high. I know that luzern did elect trump in two thousand sixteen has always been pretty even democrats register republicans. But they are actually. There are more democrats twenty thousand more democrats registered in luzerne county than republicans. It's one hundred six thousand democrats here and eighty six thousand republicans as of the latest statistics from the pennsylvania. Department of state. Emily previti thank you so much for taking the time. thanks big. thanks for listening. We'll be back soon with another special axios election. Podcast in the meantime please check out. Our website axios dot com or are axios mobile app for the election news.