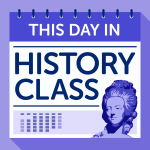 Do you love music? Are you a fan of movies like Star Wars back to the future? Harry Potter Jurassic Park and more than the soundtrack show is made just for you. I'm David w Collins joined the each week as I break down the best moments in our favorite movies, TV shows even video games and talk about why the music makes each of these experiences, unforgettable listen and subscribe at apple podcasts or on the iheartradio app or wherever you listen to podcasts this day in history. Class is a production of I heart radio. Hi, I'm eve and welcome to this day in history class I show that uncovers a little bit more about history every day. Today is may eleventh twenty nineteen. Today was may eleventh eight hundred sixty eight. A copy of the diamond sutra one of the Buddhist teachings was published on seven pages of paper pasted together to create a scroll today. The text is considered the oldest surviving complete dated imprinted book, the diamond suture contains teachings on the Buddhist principles of not abiding and non attachment, and it's a key scripture in Mehanna Buddhism. The text also provides meditations on allusion. And perception the copy of the diamond sutra that was published on may eleventh eight sixty eight is not the earliest example of block printing. But it is the oldest book to include a column in that has a verifiable date. A column is an inscription at the end of a book or manuscript that provide details of the work's publication, the diamond suture was first translated from sanskrit to Chinese around four hundred CE in eighth century China printing with done with what blocks paper was made for mulberry or hip. Then it was dyed yellow with bark from Amer court tree. The text was painted onto tracing paper, which was put onto a wooden block. A Carver then followed the chase techs to carve the shapes into the buck. Then the block was inked in stamped onto the paper in eight forty five towels emperor Wu's on of the tongue dynasty suppressed Buddhism as China. Denounced a foreign influences and old confusion, and Talis ideas. Reemerged temples and monasteries were shut down and adherence were banned from practicing the ban was bowled back not long after it was instituted but Buddhism did not thrive as it had before. A monk named Wong. Yuen Lou originally. Discover Wong Gee's diamond sutra in Hong China in one thousand nine hundred he was in a place now known as the caves of thousand Buddhas a cliff wall with hundreds of caves carved out of it. He found the entrance to a secret library that have been sealed where there were tens of thousands of documents. It's not completely clear who and why the documents were placed in the library cave. Nor is it known. Why and win the cave with field shut. But in nineteen o seven British Hungrian. Archaeologist Mark RL Stein. Was mapping the silk road when he found out about the library after some negotiation Stein, bribe long into selling about ten thousand documents and painted scrolls for one hundred and thirty pounds by invoking Wong's, painter and sate, Sean Zong, a Buddhist monk and scholar who had taken a pilgrimage to India in the seventh century and was a translator. Translator of Buddhist scriptures. One of the documents Stein. Acquired was the diamond sutra. This girl is about sixteen feet or five meters. Long and ten and a half inches or about twenty seven centimeters wide. It's made up of seven pieces of yellow stained paper pasted together with an elaborate 'lustration on the first paper that shows the Buddhist speaking to a disciple an inscription on the scroll says the following interrelation reverently made for universal free distribution about Wong. Gee on behalf of his parents on the fifteenth of the fourth moon of the ninth year, Sean long that would work out to be may eleventh eight sixty eight it's not clear who Wong. She was. Or why he had the diamond sutra printed? But it's likely that monks used the scroll to Tanta sutra, and that printing copies of the sutra allowed for wider dissemination of the Buddhist teachings today. The scroll is located at the British library. I'm coat in. Hopefully, you know, a little more about history today than you did yesterday. And here's an additional note on really old books. Books have been dated back to the BC ears like the manuscript Bulgaria national museum of history holes which is more than twenty five hundred years old, but what should be considered a book is up for debate, scrolls and clay tablets exists. That are thousands of years old as well. Also, the international done Hong project is a collaboration that has digitized archaeological materials from done long and other sites on the eastern silk road. Keep up with us on Twitter, Instagram and Facebook at TD, h c podcast. Thanks again for listening, and we'll see you tomorrow. For more podcasts from iheartradio. Visit the iheartradio app apple podcasts or wherever you listen to your favorite shows. Are you following your passion? I'm Carla Marie the host of side Hustler's. Join me as we hear the story in hustle of people following their passion outside of their regular job side, Hustler's, listen and subscribe on the iheartradio app at apple podcasts or wherever you listen to podcasts.