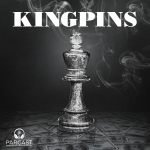 This is kingpins. Apar- podcast original. I'm and I'm kate every day in. May We're featuring a quote by an iconic crime figure teaching us in their own words what it takes to survive in the underworld today. We're going back to the formative years. If New York's most ruthless crime boss John Gotti growing up poor in blue collar Brooklyn go quickly learns the only currency he had was fear. God He received a crash course. In the power of violence. As a teenage member of the Fulton. Rockaway Boys Gang. His street experience helped him develop a philosophy that led him to greatness thirty years later when he was the head of the Gambino Crime Family. He remarked to an old friend. I never lie because I don't fear anyone. You only lie. When you're afraid gutty cooled. Phyllis nece the old school. Mafia would call recklessness when John Gotti was still battling teen tufts on the streets of Brooklyn the leaders of the Cosa Nostra were quietly taking over New York City in the old days. Mafiosos conducted their business and back rooms and ballot-boxes careful to keep a low profile and not make themselves a target but was never content to stay in the shadows. He made his name. As a feared enforcer for the Gambino crime family and worked his way up through murder and brutality using the skills he honed on the streets. Gotti soon took control of the entire operation in Nineteen seventy-six Carlo. Gambino died of a heart attack. Under normal circumstances his underboss and Yellow Della Crochet would take over but Gambino named his own brother-in-law Paul Castellano as the new boss of the Family. Gaudy was upset. He was a CALICO under Della Croce and felt a deep loyalty for the spurned underboss. And Castellano didn't do himself any favors Castellano della Croce to remain on as underboss. While taking the power that rightfully belonged to him he prohibited drug dealing which severely impacted Guardian Delic roaches income seeing Castellano disrespect for and destroy his business. Gotti decided something had to change on December sixteenth. Nineteen eighty-five pool. Castellano had a meeting at the sparks. Steak House on East Forty Sixth Street as John. Gotti watched from his car. Castellano arrived in a Black Lincoln sedan parked and stepped out a team. Assassins opened fire in the street. Cutting Castellano down easily. With semiautomatic pistols moments later Gaudy crew slowly by to confirm cast Delano was dead in one soaked night Gotti Kopf down to place for himself at the top. Castellano was gone and now gutty was the head of the Gambino crime family. The Mafia's long lasting power came from one thing. It's secrecy but he never liked to hide who he was. As the new boss Gotti wanted to live large he started wearing expensive. Italian suits and silk ties. He would walk out of the Rave Knights. Social Club in front of lines of tourists casually discussing griff te racketeering and murder with his associates. Vo Godley was tried three times during his first five years running the family. The charges never stuck tabloids called him the Teflon Don Gotti made it to the top through intimidation violence and murder. He created an empire of fear and he didn't care who was paying attention in his own words. He wasn't going to be another back door dawn but sooner rather than later. Gaudi's out in the open. Business Practices were his undoing. The wolves came crashing down when the FBI bugged the Ravens. Social Club Gory. Detail daily briefings with his cappos became a smorgasbord of evidence for the federal government. Gaudy was arrested at the rave night in December nineteen ninety after a sensational trial on April Second. Nineteen Ninety two. He was convicted for conspiracy gambling tax fraud obstruction of justice and five counts of murder from Brooklyn black tops. To Little Italy Suffolk Club's John Gotti lived by his words. He slashed and burned a route to the top murdering anyone who stood in his path. He builds a kingdom of fear while refusing to compromise who he was but his actions had consequences in by the end of the nineties. The mob is guarding. Knew it was gone. Hundreds of mafiosos either became informants or were convicted by the federal government. It just goes to show when you're running criminal empire. Maybe honesty is an always the best policy. Thanks for listening. We'll be back tomorrow. With another quote you can find more episodes of kingpins for free on spotify or wherever you listen to podcasts.