How COVID-19 Shines A Light On Our Broken Food System with Dr. Dariush Mozaffarian 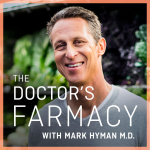