Trending in the 7th Century 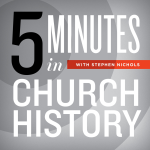 Welcome to five minutes in churches hosted by Dr Stephen. Nicholson where we take a little break from the presence to go exploring. The past asked travel back in time as we look the people events and even the places that have shaped the story of Christianity. This is our story family history. Let's get started Welcome back to another episode of five minutes in Church history on this episode. Let's return to something we haven't done for a while. Now our trending in the centuries will do trending in the seventh century. We begin with two popes. The first is gregory the great. At stretches back into the end of the sixth century starting his papacy at five ninety and it ended with his death and six so four. He was followed briefly by Pope. who wasn't all that strong? And then he was followed by Pope Boniface the third. He was only pope for nine months in six. Oh seven but he was very influential and between Boniface the third and Gregory the first we see the rise of the supremacy the of the papacy and that very much trended in the seventh century. It was pope. Boniface the third who gave the papacy gave himself the title Universal Bishop so the first thing trending is the rise of the supremacy of the papacy. Well let's stay in Rome for a little bit in six thirty eighty. The Curia Julia was converted into a church. The Curia Julia was the Roman Senate House. Senate house was begun in by none other than Julius. Caesar Yes to Brew Tae Julius Caesar and seventy five years after he began the work. It was completed pleaded by octavius. The Senate met in that building all those years and all those centuries right up until six thirty when it was converted into who at Church by the way in the twentieth century Mussalini had all the church artifice removed and in nineteen thirty eight. He restored toward the structure to its original Roman Senate glory. Well leaving Rome. Let's go to the north to England in six. Oh eight we have the earliest tradition of the great English epic Poem Beowulf. The tail of the Hero Bay will slaying dragons dragons and slaying the monster Grendel and of course. Let's not forget the much worse monster Grenfell's mom so the epic poem was trending in the seventh century. Also trending was a heresy. Trending all the time so the seventh century we have Nestorian as it was condemned in the second council of Constantinople. Back in five fifty three in the cow Sedonia in creed was reaffirmed but Alas Nestorian ism was still alive in the seventh century. Well also alive was Saint Wilfrid. Saint Wilfrid was born and six thirty four and Northumbria. He died in seventy nine. He founded a number of Abbey's monasteries. He claims to bring the rule of Saint Benedict to English monasticism and bringing order and structure to the monasteries. All over England Kyd Mun also lived in the seventh century. Six fifty two to six eighty four second half of the seventh century. He's known as the father of English Sacred Song. Well also in the century is Mohammed and the rise of Islam Mohammed was born in five seventy the first Koranic vision claimed by Mohammed was in six ten and then he began his teachings there and Mecca not met with success but rather opposition then persecution. He left Mecca for Medina and six twenty two and six twenty nine. He returned with an overwhelming army and simply took the city of Mecca. He died three years later in six thirty two at his death he had somewhere around fifty thousand adherents and so we have the beginning and the rise of Islam. One last thing from the Seventh Evans Century. The earliest record of the spinach plant comes to us from the seventh century. It was a record written in Chinese and six forty seven. Ad So there you have it. Eat your spinach and remember. That's what was trending in the seventh century. I'm Steve Nichols and thanks for listening to five minutes in Church history for more ordination or to listen to past episodes. Please visit five minutes in Church. History Dot Com.